Azure is a usage-based subscription which means customers pay for their services after the usage of the services is reported. 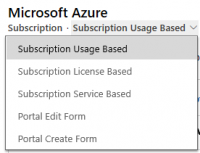 Usage based subscriptions don’t have an initial quantity. They are billed to the end customer using the Markup as shown in the figure below:

Microsoft retail price is $100 partners get billed $85. Standard Azure Margin is 15%. Which effectively means that the cost has to be marked up by 17.64 percent to equal retail price.

On the usage-based subscription, there are important fields to take note of:

The daily usage details are imported every day into the Work 365 application through the Data Import mechanism in Dynamics 365.

The price information under the usage summary are tentative prices, and they are only an estimate on usage consumption.

The monthly summary data is imported through the Provider Invoice. Microsoft Partner center makes the Provider Invoice available at the Billing Date and this data is synchronized with work 365. The customer-facing invoice, and the attached csv file, is created using the Markup percentage specified in the subscription. As the records on the usage summary get pulled in, the Current Cycle Consumption field on the subscription get updated automatically.

All the usage summary data from Microsoft’s invoice and reconciliation files is automatically sorted and assigned to the appropriate Azure Subscription and customer. Usage-based subscriptions have the billing information for the previous month’s billing cycle on the billing contract invoices. The billing information will appear as a single line item on the invoice for the customer’s total consumption from the previous month.